I started out a bit intimidated by the idea of accosting random students and asking them to appear in a video forthe web, but it turned out to be straightforward and I got a really positive response.

Mostly I set up in the library foyers – I had my laptop and microphone on a booktrolley so could record then and there. I generally ignored students on their way out (likely rushing to a lecture) in favour of those coming in. I didn’t have any tangibe bribes, but did want to ‘offer’ something, so generally started with “Hi, have you seen the video on the library homepage?” Then I could show them where to find it and, while they were watching a bit of it, explain what was going on and ask them if they’d help out.

To my surprise, about 1 in 3 agreed. This varied by branch: at one branch it was more like 1 in 10. At some branches, the librarians introduced me to likely candidates. But even approaching people at random, I could typically record half a dozen volunteers in not much more than half an hour.

What did they say? Responses fell fairly evenly among the old triumvirate:

Place: a warm place (it’s currently winter in NZ), a quiet place. (Best new motto we’ll never use: The Library: There’s no-one around.) A place to study, essentially, though one or two mentioned hanging out with friends.

People: they see librarians as friendly and helpful – one made a point of saying that (contrary to expectations, one infers) the librarians aren’t intimidating or scary.

A couple of days after the second video went up, a colleague asked for a transcript so she’d know what people were saying. This reminded me I’d been interested in the possibilities dotSub provides. I got permission to put the videos up there as well. It was dead simple to transfer the videos across from YouTube, and the interface is incredibly user-friendly, so (as I already had the transcripts from when I’d been editing the videos) it took me less than two hours to create the subtitles for both videos – that’s less than 20 minutes per minute.

I finished editing the second of our Library Week videos late on Friday (I needed it in a couple of different formats and had forgotten how long it takes to save out of iMovie project format – and then of course I discovered a couple of things that needed a last-minute edit) but still in time for IT to get them up on our homepage for the start of Library Week.

Then I went home and blobbed for the weekend. The video only took about 20 hours of actual work, but cramming that into 2 weeks (along with organising a “Blue Skies” forum and doing desk shifts and everything else going on) was… hectic towards the end. But doable. And a heck of a lot of fun.

I’ll blog more on the experience later, but in the meantime here’s the finished thing:

I’ve been working on a two-pronged Sekrit Project for my library’s Library Week celebrations: part 1 has just been unveiled on the library home page — “Library Video”, in the News section.

Part 2 is to do essentially the same thing over again except with students instead of library staff. Current plan is to start filming tomorrow and have the completed video ready to go when Library Week begins on the 18th August.

[Technical details: filmed with webcam and external microphone on an iBook, recorded and edited entirely in iMovie (except opening and closing images which I made in some image program I now forget). Filming was about 7 hours (includes travelling between various branches on campus) and editing of photos and footage about 14 hours.]

Rhonda Gonzalez is asking about the top myths about libraries.

One of the things we tried for Library Week here was an “In 2017, libraries will be…” display – shamelessly stealing the idea from National Library’s LIANZA 2007 campaign and asking students what their vision of the library in ten years time will be.

Answers so far are on Flickr. We haven’t got a huge number of responses, but we’ll probably leave it up for another couple of weeks (ie until the end of exams) to see how it grows.

I’m now thinking towards next year’s Library Week – say, a display showing “a day in the life of a librarian” with all the things we do in a day beyond issuing books….

Of course we did have glitches of varying problematicity over the week. In no particular order but my memory:

Also – not a glitch exactly – it was only between two libraries at a time. Using different software that’d connect one-to-many, or many-to-many, would increase possibilities for sharing events. Of course at this time of year we were all too busy to think about extra events. And also one-to-many would make it much less private for students who wanted to talk to a friend or family member in another city. So, pros and cons; but it’s something worth exploring if we do anything like this again.

And there has been talk of doing something like this again, perhaps in a different time of year – for example during Orientation, or after the settling-in period. So obviously it hasn’t all been bad. 🙂 For myself, it’s been a great buzz seeing it all come together, watching the students get so much use out of it, and each day meeting face-to-face more of the librarians who’ve made this such an amazing event. 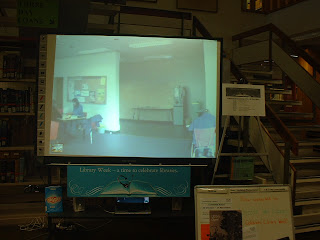 (Wow, Blogger’s code for images is rather intimidating.)

Okay, this isn’t a very exciting picture and the quality’s pretty bad because I haven’t tried any sort of clean-up. There aren’t any students in it because of library policy that photos with people require permission and I was feeling a tad lazy. And it’s dark because I couldn’t use the flash because the image was being projected.

That said, it gives an idea of how we set up the station: smartboard with image projected onto it; laptop sitting below connected to speakers and webcam. We put our webcam to the right, just above the poster showing the timetable. (Other things displayed were a library week banner, fliers showing the timetable and library tips, and a whiteboard naming the library we were connected to at any given time.) Internet was wireless which only caused a problem once, briefly, late in the week.

This image shows us connected to Lincoln University Library, in their student lounge. (Different libraries set it up in different areas – some near the main entrance, others near the service desk, etc. In my branch we had a good spot that let us combine these two: directly in front of the main entrance so it got lots of traffic, and next to the lending desk so we could quickly respond to problems, and also overhear and respond to students wondering among themselves what it was about.)

Some libraries had it just on a normal computer monitor, rather than projected onto a screen. This wasn’t so visible, but it had the advantage that people could sit down at it. When one of our students wanted to sit down and chat with his sister we brought a chair over for him but it was trickier to adjust the camera angle.

I’ll try and clean up some of my photos over the long weekend and hopefully post something slightly nicer when I’m back on Tuesday.

Other uses I’ve seen or heard about:

Ideas being talked about:

(Well, at least I’m talking about the last two – but people are humouring me and agreeing that they’re nice ideas.)

As I write this, there’s a flurry of Twitter messages over the news that MySpace is going to embed Skype in its interface.

Generally New Zealand’s Library Week is very focused on public libraries but earlier this year I was asked to come up with some ideas for what we could do in our university library. I brainstormed with a couple of colleagues and somehow came up with the idea of getting together a network of uni libraries from all over the country to have videolinks set up between each pair, throughout the whole week.

A couple of months later, it’s actually happened. I’m now typing this from our front desk with a good view of both my own branch and one of the other branches on campus, and we also have been and will be connected with other cities. 11 libraries are involved from 6 universities – for an example of the timetable seeour timetable – probably a temporary link.

We’re using Skype because it’s free, easy to use, and I was familiar with it. 🙂 Each library has a computer station with webcam set up in a public area – here we’re also projecting ours onto a large screen so it’s very visible. The connection is set up to be permanently open for four hours per library, morning or afternoon – so students can see into the library and talk with whoever might be passing, or make a date with their friends to talk over the connection.

People were a bit shy of it to start with but they’re getting more enthusiastic about it, particularly when the opportunity of talking to friends in other cities is pointed out. I’ve heard several students planning to text their friends – and people have passed on stories of students arriving at preplanned times to meet friends. Librarians have been using it too: one person phoned a colleague to come and talk over the connection about something, and I used it myself to talk a colleague through a laptop issue (she held the laptop screen up to the webcam so I could see what was going on).

Libraries being what they are I’ve been writing this post in bits and pieces over several hours so I’ll stop here and post, but I’ll come back later in the week and write more about the experience – glitches, success stories, ideas for future usage. For now I’ll just say that it’s been really great to see it up and running and getting so much interest from our students.